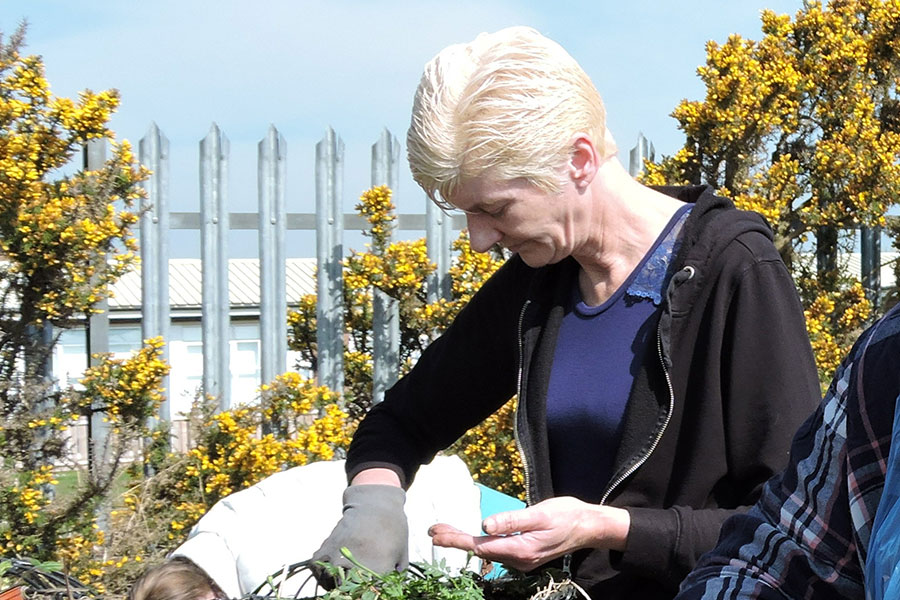 “Before Bridge I was in a really dark place, I wouldn’t leave the house and was depressed.”

Diane self referred to the Bridge Project in February 2019 after hearing about us from one of her friends who is an existing beneficiary and invited her along to one of the creative writing sessions to see if the project was for her.

Having moved to Scotland Diane was diagnosed with Fibromyalgia and slowly her marriage broke down and she returned to Northumberland. She wouldn’t leave the house and couldn’t speak to people as felt she was being judged and was in a really dark place and had trouble sleeping.

Diane left school with no qualifications only life experience.

Throughout her life she has worked as a shop assistant, pack house manager in a factory and a bakery shop manager.

Joining the creative writing class turned a corner for Diane. Nobody judged her and she expressed herself through writing. She also joined in other creative workshops and sessions and through the arts, Diane made more friends and became part of a bonded group of individuals all from different backgrounds with different stories to tell and became part of a small family of friends who refer to themselves as the BMC (Bridge Mental Crew).

“My depression would take over and I’d have no interest in anything.”

Whilst on the project Diane has embraced various activities including; cooking with herbs, growing your own herbs, graffiti art, creative writing, sculpture & was part of an art exhibition “A Picture of the Mind” a collaboration between the Bridge Project and Northumberland Bait based at Woodhorn Museum where members of the BMC proudly displayed their art work to the general public. She was also involved in a Wellbeing session that she co-hosted and spoke to a room of over 40 health professionals in a session to demonstrate how art can help to improve your mental health and wellbeing.

Although daunting at first, Diane found the support of her Bridge Worker, Alison and her friend Carol helped her to overcome her fears. Alison is also going to be supporting Diane with her PIP application.

Diane told us that Bridge has helped her get out of the house and learn to trust people again.

“I looked forward to the art sessions on a Wednesday it was like going for a coffee with friends”.

Diane has made a couple of friends on the project and is attending a writing class and meets regularly for coffee.

When asked to describe how Bridge has helped her Diane said “It’s life changing – if it hadn’t been for Bridge I wouldn’t be able to cope going out.”

Diane feels she is in a better place now and can’t stop writing and has started crafting and keeping herself busy creatively. Alison has arranged for her to get involved in future art exhibitions and will have her own work on display something she is extremely proud of.

“Bridge helped find part of the old me and created a new me!”

Diane can’t recommend Bridge highly enough “When people are down and at their lowest point they think there’s nowhere to go – Bridge is your second chance.”

What difference is Bridge making?

What’s next for Diane?

If you think we can help to make changes in your life why not contact us?

Can we help you?
Free support to help you bridge the gap to work or skills.

We use cookies on our website to give you the most relevant experience by remembering your preferences and repeat visits. By clicking “Accept All”, you consent to the use of ALL the cookies. However, you may visit "Cookie Settings" to provide a controlled consent.
Cookie SettingsAccept All
Manage consent

This website uses cookies to improve your experience while you navigate through the website. Out of these, the cookies that are categorized as necessary are stored on your browser as they are essential for the working of basic functionalities of the website. We also use third-party cookies that help us analyze and understand how you use this website. These cookies will be stored in your browser only with your consent. You also have the option to opt-out of these cookies. But opting out of some of these cookies may affect your browsing experience.
Necessary Always Enabled
Necessary cookies are absolutely essential for the website to function properly. These cookies ensure basic functionalities and security features of the website, anonymously.
Analytics
Analytical cookies are used to understand how visitors interact with the website. These cookies help provide information on metrics the number of visitors, bounce rate, traffic source, etc.
Advertisement
Advertisement cookies are used to provide visitors with relevant ads and marketing campaigns. These cookies track visitors across websites and collect information to provide customized ads.
SAVE & ACCEPT